The acquisition and refurbishment of the RAAF Iroquois A2-1022

The aircraft you see here is a former No. 9 Squadron RAAF Iroquois A2-1022 which was delivered to Fairbairn RAAF Base on December 12, 1964. It was transferred to South Vietnam as part of the Australian Task Force contingent.
This aircraft and A2-1020 were crucial elements in the Battle of Long Tan on August 18, 1966. Without their participation it is likely the battle would have had a vastly different outcome.
The producers of the movie Danger Close, which paid tribute to the men of 6 Rar who suffered through, but won, the battle of Log Tan, saw the value of including in the movie the actual Huey that supported and resupplied the men on the ground in an act of heroism. The Caloundra Sub Branch agreed to allow the helicopter to be taken to the Gold Coast where the movie was being shot.
After decommissioning, this aircraft was presented to Bogan Shire Council in 1990, in recognition of the evacuation of Nyngan, NSW, due to flooding. The evacuation was carried out by RAN Sea King helicopters.
A former 9 Squadron person was in Nyngan and saw the aircraft on display there. He recognised its historical importance, and brought it to the attention of the Caloundra RSL Sub Branch. Funds were allocated to recover and restore the aircraft if it were to become available.
The Bogan Shire Council agreed to part with it, provided Caloundra replaced A2-1022 with another Iroquois. The recovery team repaired a donor aircraft from McDermott Aviation Cooroy that had been written off, to display standard and were able to comply with their request.
The replacement helicopter was then taken to Nyngan and the change-over of aircraft was completed during May 2011.
The majority of the recovery team had served with the RAAF and had been involved with A2-1022 in some way during their service lives. The team also included willing volunteers who were not former servicemen, but they wanted to be included and were "paying their dues". We are truly thankful for their efforts.
The Caloundra Sub Branch has a significant military collection and is expanding constantly, so a military icon such as A2-1022 was an appropriate acquisition.
The community involvement was fantastic. We were surprised almost daily by the generosity of our civilian suppliers.
For instance, the paint was supplied by Du Pont Paints, and steel was supplied by Steel Force.
Caloundra Helicopters provided us with numerous parts and support.
Heli-Centre in Caloundra helped us with the provision of labour and allowed the use of their paint shop.
We must also acknowledge the help of the RAAF Cadet Squadron, No. 223, which provided the area to do the actual job.
The community support and interest in the project was an inspiration. We believe the commemoration has had a positive effect with the people of the Sunshine Coast and Caloundra in particular. It will reinforce the ethos of mateship and support of others, that is, the Long Tan experience and our support group.
The start date for the project was July 24, 2009. The dedication was held on March 16, 2012. 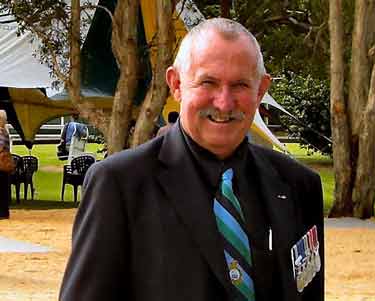 Vale Bob McInnes, who
died on March 28, 2019.
Bob was the team leader of the Caloundra RSL crew that rescued Huey A2-1022 from its home at Nyngan, NSW.
He served in the RAAF from 1963 to 1969, and his postings included 5 Sqn and 9 Sqn,
He was attached to 5 Sqn from December 1964 to June 1965, where he saw operational service in Malaysia
He said when Caloundra RSL found out that A2-1022 was at Nyngan they were determined to acquire it.
"It was 'owned' by the Bogan Shire Council," Bob said, "and, after some negotiation, they agreed to release it."
There was one proviso - Caloundra would need to find a replacement and restore it to 1022's condition.
"We agreed, but that was much easier said than done," Bob said.
These are the 11 dedicated members of the Caloundra RSL Sub Branch who set about the restoration - receiving regular advice from Rob Gee of the Canberra War Museum: Bob McInnes, Max Baxter, Ian Newham, Peter Moore, Bill Wiggett, Kerry Millard, John Dunn, Roy Robinson, Ingo Meier, Darryl Turner and Quentin McCutcheon.